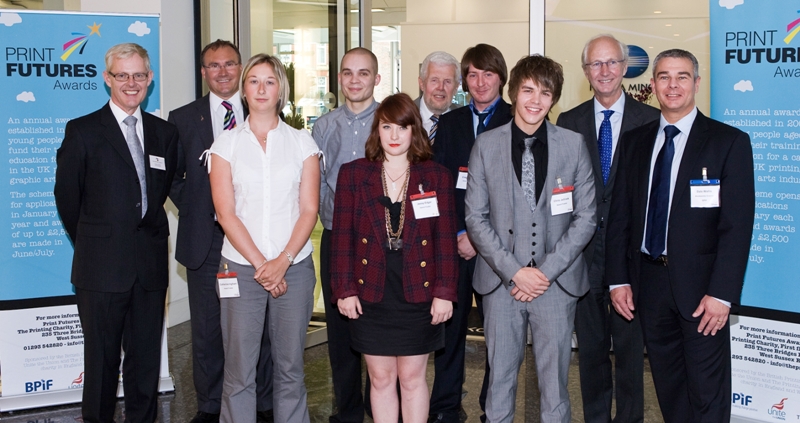 Now in their seventh year helping young people train for a career in print and the graphic arts.

The British Printing Industries Federation, Unite the Union and The Printing Charity are delighted to announce that five young people have been successful in this year's Print Futures Awards.

The five winners impressed the judging panel with their enthusiasm and commitment to train for a career in the UK printing and graphic arts industries. The Print Futures Awards, which are now in their seventh year, offer awards of up to £2,500 each.

"The Awards attract an extremely high standard of entries every year and the five winners stood out from those shortlisted this year," said Dale Wallis, BPIF Membership Director and member of the judging panel. "If the UK printing industry is to remain a vibrant one, it's vital that we continue to attract talented young people like these."

Steve Sibbald, National Officer for Unite, added: "These Awards are an investment in the industry's future by supporting young people to develop the necessary skill sets for their careers. We wish this year's winners all the very best in their chosen fields."

The 2010 Awards were presented to the winners at a ceremony kindly hosted by Konica Minolta at their London headquarters on 20 July. Attending were senior representatives from the three sponsors and the printing industry, together with the winners' personal guests.

The 2010 Print Futures Awards winners are:-

Craig is the Digital Print Manager at Jade Press Leeds and is seeing his company's digitally produced work increase dramatically. He will use his award to help pay for his studies for an Impress degree in printing, packaging and graphics at the University of Leeds, which he has been self-funding. He has been in print since an early age and "loves everything about the trade."

Paul has just graduated with a BA Hons in Graphic Media Design from the London College of Communication. He has completed design internships in Berlin and Tokyo and a major project with Nike. He says: "I eat, sleep and breathe print design."

Chris will study for a BA Hons in Graphic Design at Lincoln University from September. Passionate about design, Chris plans to work in print and then later to go freelance. He is a fan of digital print, which he says "has drawn me in."

Catherine is a Brand Artworker working for Paragon Print & Packaging but placed within the Asda organisation in Leeds. She takes great pride in spotting the packaging she has designed within supermarkets. She already has an HNC and will use her award to fund a BA course starting in September. Catherine prefers design for print rather than other media and hopes to progress within Paragon.

Jessy was invited back from last year's applicants. She has been studying for a BTec National Diploma in Graphic Design at Liverpool Community College. She has won a place at Falmouth to study a BA Hons in Graphic Design beginning in September.

The Print Futures Awards are open to anyone aged between 16 and 30 years to train for a career in printing or the graphic arts. The only stipulation is that applicants are resident in the UK and intend to or already work in print or graphic arts in the UK.