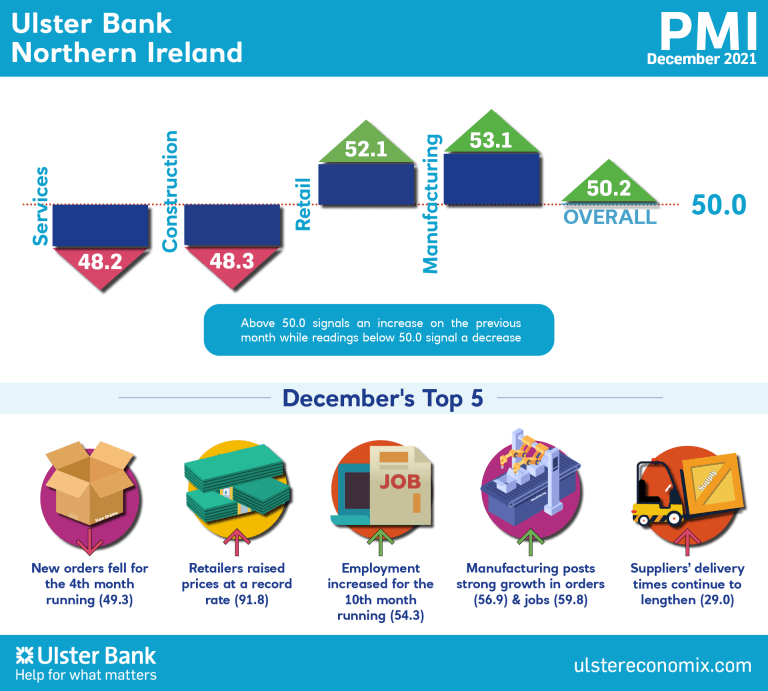 The Latest Ulster Bank Northern Ireland PMI®  - produced for Ulster Bank by IHS Markit - indicated that a reduction in consumer confidence amid the emergence of the Omicron variant led to a further decline in new orders, while growth of business activity was only fractional. Inflationary pressures remained elevated. On a more positive note, a further solid rise in employment was recorded and firms were optimistic regarding the outlook for output in 2022.

A resurgence of Covid-19 infections, linked to the omicron variant, in December acted as a headwind for growth throughout the UK. 11 of the 12 regions reported slower rates of expansion with one - the North East of England - posting a marginal contraction.

Northern Ireland's private sector recovery almost ground to a halt in December with the rate of growth in business activity scraping just above the no change threshold of 50.0 at 50.2. That was the weakest rate of expansion for the 11 UK regions recording growth last month.

Despite these near-term challenges, local firms notched-up their 10th successive month of employment growth with all four sectors increasing their headcount. All sectors bar construction also anticipate strong rises in output by the end of the year. Retail, perhaps somewhat surprisingly given the cost-of-living pressures, is its most optimistic since March 2018. But with retailers increasing their prices at a record rate, it remains to be seen whether consumers will share that optimism.

Northern Ireland's underperformance compared to the rest of the UK and the Republic of Ireland is due to the construction and services sectors. These two sectors saw activity fall in December whereas retailers and manufacturers posted growth. Manufacturing was the only sector to report a rise in new orders with retail, services and construction all signalling a drop in incoming work.

2022 is going to be dominated by three economic themes that were prevalent at the end of last year - slower growth, severe inflationary pressure, and the stop-start disruption associated with Covid. This might ease in the second half of the year, however, don't forget Brexit. Whilst we should be over the hump of the pandemic by mid-2022, the same can't be said for Brexit as some of the current grace periods come to an end in July.

The main findings of the December survey were as follows:

The headline seasonally adjusted Business Activity Index dropped to 50.2 in December from 52.9 in November. The index signalled a fractional rise in activity that was the slowest in the current nine-month sequence of growth. Services activity decreased for the first time since March, while construction output was also down. Manufacturing and retail remained in growth territory. Material shortages and reduced consumer confidence were behind the slowdown in output growth. These factors also acted to reduce new orders for the fourth month running.

Supply shortages remained a feature of the latest survey, with delivery times lengthening markedly and backlogs of work rising despite the drop in new orders. Rates of inflation also remained elevated, despite softening from November. Higher costs were reported for a range of inputs including energy, freight, fuel, raw materials and wages. A further solid increase in employment was recorded in December amid efforts to expand capacity and deal with backlogs of work. Expectations of a return to growth in new orders during 2022 supported optimism in the 12-month outlook for business activity.